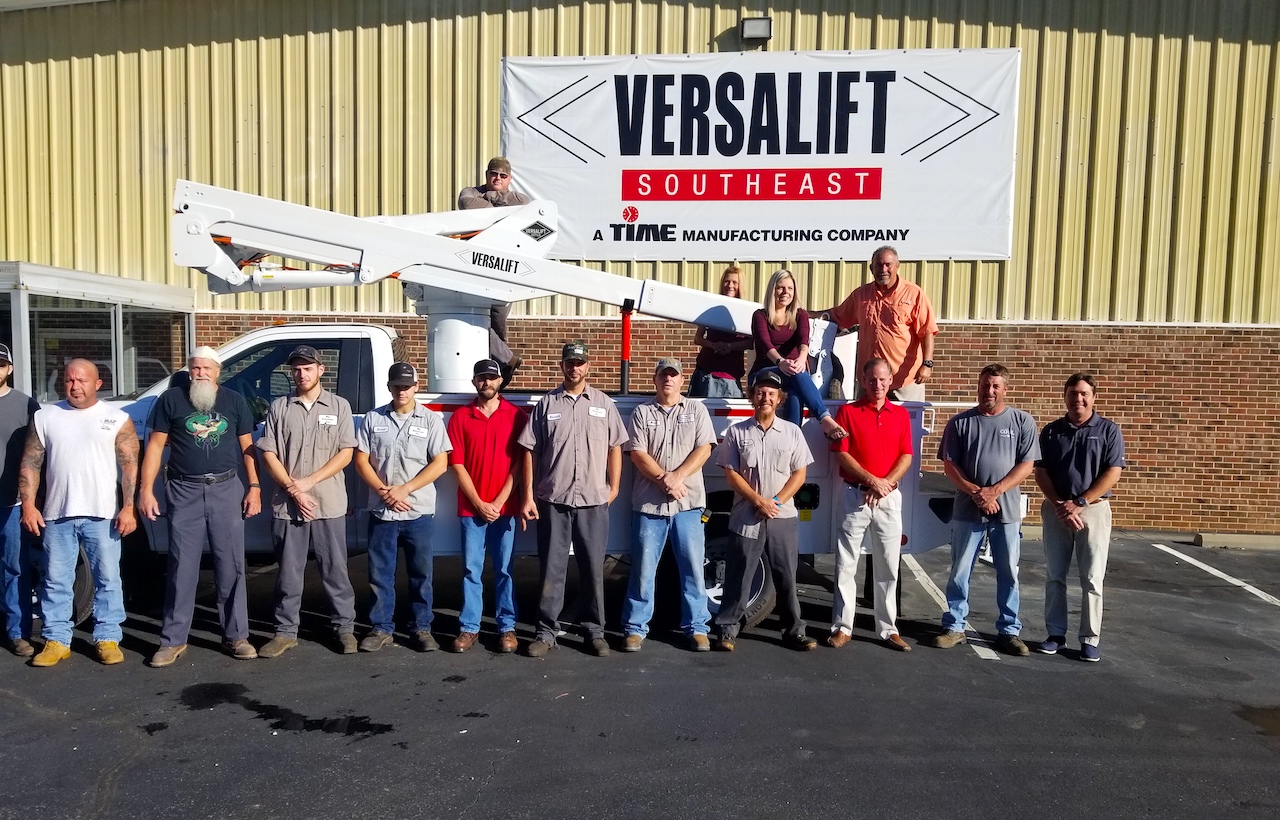 TAKE ME TO VERSALIFT SOUTHEAST

Versalift Southeast, formerly Map Enterprises, is a full service distributor of Versalift bucket trucks, digger derricks, cable placers and other high-reach equipment. We proudly provide sales, service, parts, maintenance, testing and roadside service to our customers across the Southeastern United States. Since 1967, this location has been serving utility and telecommunications fleets, and other customers in North Carolina and South Carolina.

NEW EQUIPMENT
SERVICE
PARTS
CONTACT
Get Service
We have service centers across North and South Carolina
Get Service
New Equipment
We carry the full line of Versalift Aerial Lifts, Cable Placers, and Digger Derricks as well as many complimentary products
Versalift.com
Parts
Learn how to properly service and maintain a Versalift Aerial Lift
Learn More
Versalift Southeast
Situated between Raleigh-Durham and Winston-Salem in Graham, NC, Versalift Southeast’s North Carolina location was initially established as MAP Enterprises more than 50 years ago. An established and respected supplier of high-reach equipment, Versalift Southeast provides sales of new and used equipment, service, road service, parts, rentals and hydraulic & dielectric testing for fleet and contractor customers in the electric utility, tree care, bridge inspection and telecommunications fields. We are proud to provide excellent service for our many customers across the Southeastern United States. Versalift Southeast, in its North Carolina location, features 18 work-bays, paint and body repair facilities, dielectric safety testing certifications, and an additional  27,000 square feet of upfitting and assembly space. As a wholly-owned Versalift distributor, Versalift Southeast will continue to provide and integrate the same leading quality, service, and care for our valued customers.
-->
The Industries We Serve
We offer the safest and most reliable Aerial Lifts available in the market today.
01
Electric Utility

Versalift Southeast supports the Investor-Owned Utility fleets and contractors who maintain overhead electric power distribution networks. Because these organizations are responsible for technicians who must sometimes work in hazardous conditions, they require the safest and most reliable bucket trucks available. Versalift insulated aerial lifts come standard with the most advanced safety equipment in the business.

As a company-owned distributor of Versalift aerial lifts, cable placers, digger derricks and other specialty high reach equipment, Versalift Southeast works with government entities at the local, county and state levels. Thanks to a co-operative agreement with Sourcewell (formerly NJPA), we can offer pre-negotiated pricing to school districts, libraries, community colleges, state universities and other publicly owned institutions.

Versalift Southeast assembles and upfits high-reach utility equipment for use in ongoing maintenance of Signage, Roadway Lighting and Traffic Signals across the Southeast. Many organizations, including fleet organizations, small businesses and government organizations at the municipal, county and state level, need a variety of high-reach vehicle-mounted aerial lifts to do their work.

At Versalift Southeast, we know that telecommunications technicians and contractors spend a lot of time in their vehicles. With specific needs for horizontal and vertical reach, equipment storage capacity and maneuverability, telecommunications fleets can rely upon the team at Versalift Southeast to assemble, upfit and deliver the correct equipment, to spec, every time.

North Carolina is the ninth most populous American state, with more than ten million people who call it home. Known as ‘the Tar Heel State,’ North Carolina boasts a robust manufacturing economy, a booming service sector, and the third largest banking center in the country, located in Charlotte. Additionally, North Carolina is a major agricultural producer, with the nation’s largest annual crops of tobacco and sweet potatoes. With several well-developed population centers, North Carolina has a vibrant research and science economy, especially in the famed Research Triangle, which sits between Raleigh, Durham and Chapel Hill. North Carolina is a leader in renewable energy, with some of the largest hydroelectric energy resources in the United States.

Known as ‘the Palmetto State,’ one of the original Thirteen colonies and the eighth American state to sign the United States Constitution, South Carolina is home to more than five million people. Because the state has created a strong pro-business environment, it is a manufacturing home to many major global companies, including Boeing and BMW, and has a vibrant service sector. Top employers in South Carolina are in healthcare administration, technology, aerospace and manufacturing. Tobacco, soy beans, beef and poultry are important and lucrative agricultural commodities for the state. With a strong energy sector, South Carolina derives most of its electrical power from four nuclear plants. Renewable sources of energy continue to gain momentum in the state.

Service
New Equipment Sales Versalift Southeast sells a complete line of vehicle-mounted aerial lifts, cable placer units and digger derricks. We perform assembly and upfitting operations locally, and work with customers to deliver high-reach aerial lifts to spec. Please contact our sales department for more information, or click below to learn more. Aerial Lift Services Providing a full suite of equipment services for our fleet and contractor customers, Versalift Southeast will handle service requirements ranging from scheduled maintenance and dielectric testing to complete lift remounts. Please contact our service manager or read below for more information about our services. Services Provided Upfitting and assembly of new equipment Repair of all kinds - Versalift and competing brands - of high-reach equipment Hydraulic System Rebuilding and Remounting Regular maintenance of contractor and fleet high-reach equipment Inspection Services (ANSI, DOT) Testing Services (dielectric, hydraulic, etc) Hydraulic Systems Repair Electrical Systems Troubleshooting Welding, Paint and Body work Equipment Rentals As part of the Versalift family of distributors, Versalift Southeast is proud to offer a huge selection of used high-reach equipment through our corporate partner TRL and our network of domestic rental partners covering the nation. We also have used and certified pre-owned aerial lifts available at great prices. “Our strength lies in the service we provide to the market. We are attuned to our region, and we have the ability to change with its demands. Our dedication to our customers provides the products and service they demand. What we sell will continue to set us apart as a leader in our market” - Walter G Allen, Founder, MAP Enterprises
NORTH CAROLINA

Parts
At Versalift Southeast, we keep most popular parts for every bucket truck, cable placer and digger derrick we manufacture upfit and assemble. The combined resources of our parts and service departments make a great team in servicing your high-reach equipment. These parts are available at all of our locations or can be expedited via our Parts Hotline 866-LIFT-U-UP or email us at partsorders@versalift.com